Growing up in small-town Southeast Missouri and then joining the Navy at age 19, Ben Pierce didn’t take a direct path to becoming a sculptor. But it was those life experiences that led him to explore his creative side upon his return home from serving in the Persian Gulf and off the coast of England. 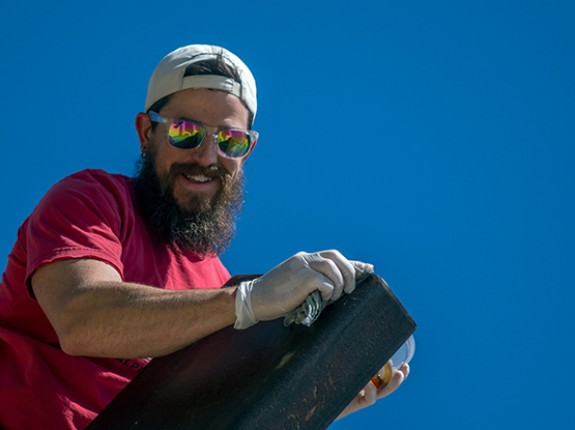 Sculptor Ben Pierce, whose work is now on display at Splinter Creek.

His earliest works, which all feature a gap between large steel shapes, germinated from a doodle and a sub-conscience thought. “You know when you’re on the phone, and you just kind of start drawing? Well, I kept drawing the same kinds of things over and over. All my doodles had this negative space,” Pierce says. It took delving a little deeper to uncover what that negative space meant to him. One day he realized it was about readjusting to life as a civilian. Returning home at age 23, he had imagined his old life would be waiting for him. But many of his childhood friends had started marrying and having children. Even though he and his friends still looked the same, and still had the same histories and stories in common, they no longer fit together. Something was ever so slightly, and yet profoundly, off.

“You know, you leave as a young person and kind of don’t know any better, and try to pause your life,” he says. “Or that’s what you think you’re doing. When you come back, you think you’re going to press ‘play’ and pick up right where you left off. But I was a different person. It was a hard concept to grasp. It was hard to deal with when you weren’t anticipating that.” 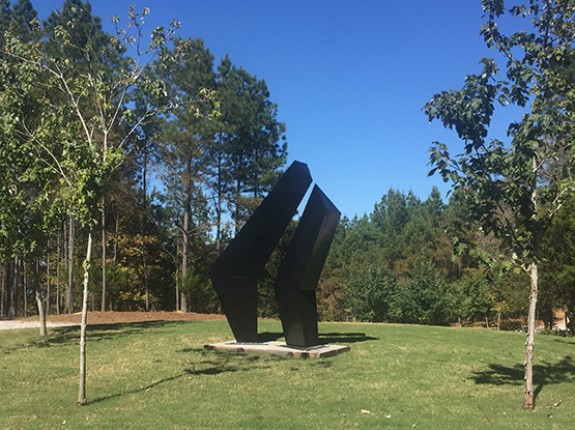 “These two forms look like they should fit together, but they don’t. As much as you want to push them together, they won’t fit.” -- sculptor Ben Pierce

He began to explore that emotion through his creation of 3-dimensional shapes. It led to what he titled his “Gap Series.” A piece from that series titled “Closer Separation” was recently installed at Splinter Creek.

“These two forms right here, they’re the same materials, they’re the same color,” Pierce says. “They look like they should fit together, but they don’t. As much as you want to push them together, they won’t fit. So that’s a representation of me or personal relationships that I’ve had. My reason was the military, but we all have gone through these things.” Pierce with more of his sculptures.

“As you circle the piece, it begins to reveal itself,” Leake says. “The sculpture needs to be in a place where it can be viewed from all sides, so we installed it in the middle of a roundabout on the property. It’s very striking and beautiful.”