At Home Memphis & Mid South magazine features the Boathouse at Splinter Creek in its July 2021 issue. Author Terri Glazer writes, "The mid-century modern home is a stunning example of a concept central to the architectural guidelines of Splinter Creek—that all structures in the community 'live lightly on the land.'" The Boathouse at Splinter Creek (photo by Erin Austen Abbott).

The article also highlights much of the homeowners artwork and furnishings, especially several tables by George Nakashima, an innovator in furniture design in the 20th century and a father of the American craft movement, and a spectacular chandelier designed in the 1960s by Swedish glass artist Eric Hoglund. The primary bedroom of the Boathouse at Splinter Creek (photo by Erin Austen Abbott).

The full text of the article can be found in the July 2021 issue of the magazine, on newsstands now, or on the At Home Memphis & Mid South website. 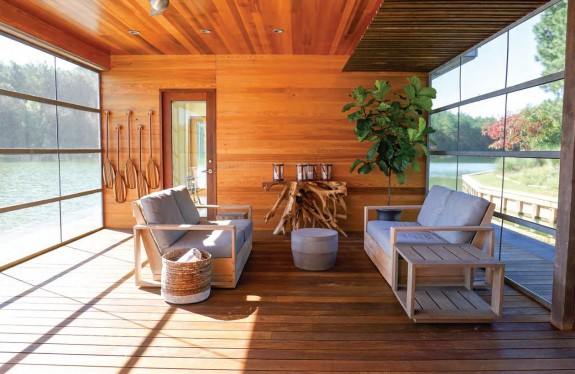 The screened-in porch of the Boathouse is a favorite place to enjoy the cool lake breezes (photo by Erin Austen Abbott).